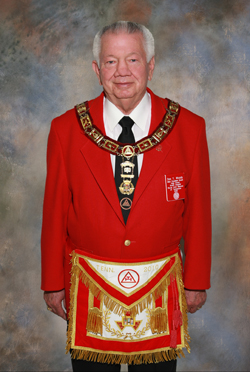 Born in Pemiscot County, Missouri on January 2, 1939 the son of Irene Yates Woody and Ellis C. Woody. He attended public schools in Caruthersville, Missouri and graduated from Caruthersville High School in 1957. Companion Woody attended State Technical Institute Memphis, earning Associate of Science degrees in Accounting and Vocational Education. Attended the University of Memphis earning a Bachelor in Business Administration and Master of Science in Technical Education. Companion Woody joined the United States Navy in May, 1957 and retired on July 31, 1981. After his retirement he joined the faculty of State Technical Institute Memphis as an Associate Professor. Companion Woody entered the Federal Civil Service in 1983 and served for twenty-two years as an Education Specialist and Educational Statistician, retiring on September 30, 2006. Companion Woody was married on April 12, 1960 to Rosalind Jenkins of Caruthersville, Missouri. They have two children, two grandchildren and one great grandson. Rosalind is retired from the Navy Exchange resale system where she worked as a visual marketing representative. Companion Woody was raised a Master Mason in Tipton Lodge No. 226 in April, 1983 and served as Worshipful Master in 1989. Companion Woody served the Grand Lodge as Grand Pursuivant in 1999. He is Past High Priest of Rosemark Chapter No. 225 and served the Grand Chapter in 2000 as Grand Royal Arch Captain. He has received the Order of High Priesthood. Companion Woody is Past Illustrious
Master of Rosemark Council No. 131 and served the Grand Council as Grand Sentinel in 2004. He has received the Order of the Silver Trowel. He is Past Commander of Rosemark  Commandery No. 39 and has received the Knight Crusader of the Cross. Companion Woody is KYGCH in the York Rite and 33° Inspector General Honorary in the Scottish Rite. He is presently serving as Junior General of St. Stephens Conclave Red Cross of Constantine. Companion Woody is Past Worthy Patron of Munford Chapter No. 380 Order of the Eastern Star. He is
Past Governor of West Tennessee York Rite College No. 141, having received the Order of the Purple Cross in 1999. Companion Woody is Past Sovereign Master of Emerald Isle Council No. 346 Allied Masonic Degrees. He is Past Excellent Chief of Tralee Council No. 41 Knight Masons. Companion Woody is a member of Al Chymia Shrine A.A.O.N.M.S. He holds membership in several other affiliated Masonic bodies. Companion Woody was elected Excellent Grand Captain of the Host in March 2007, and has advanced each year, being elected Most Excellent Grand High Priest on March 23, 2010.