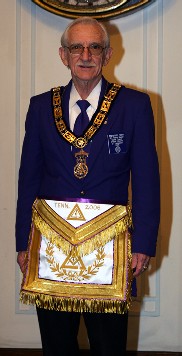 Born to John Robert and Emma Lee Horn on July 6th 1940, at their home in Iron City, Tennessee. He was educated in the public schools of Lawrence County, graduating from
Loretto High School in Loretto, Tennessee in 1958.

Marshall is a machinist/tool and die maker by trade and worked some forty years, becoming a
designer/supervisor and retired in 2001 from General Electric Company in Selmer, Tennessee. He now resides in Bethel Springs, Tennessee where he has a small “hobby shop”. He also was a part time vocational instructor for The State of Tennessee for several years.

He is the proud grandfather of two granddaughters, April Shannon Horn of Martin, Tennessee and Amy Shashawna Horn of Selmer. He also has a great-granddaughter, EmmaLea Grace Horn, and a sister, Sallye Mae Wilson of Springfield, Tennessee.

Marshall was initiated an Entered Apprentice Mason on January 9th, 1989, passed to the degree of Fellowcraft on February 7th, 1989, and raised to the sublime degree of Master Mason on March 10th 1989 at Selmer Lodge #743 in Selmer Tennessee where he served as Worshipful Master in 1995, 1999 and 2000 and is an honorary member of Adams Lodge #264 in Middleton, Tennessee.

He was made a Master of the Royal Secret of the 32 Degree of the Ancient and Accepted Scottish Rite in the Valley of Corinth, Orient of Mississippi on April 28th, 1990.

He received the Select Masters degree November 3rd, 1990 in the now defunct Savannah Council #104 where he served as Illustrious Master in 1994 and received the order of The Silver Trowel March 21, 1994. He is now serving as Deputy Master of Roy Holland Council #89 at Lexington, Tennessee where he is a life member.