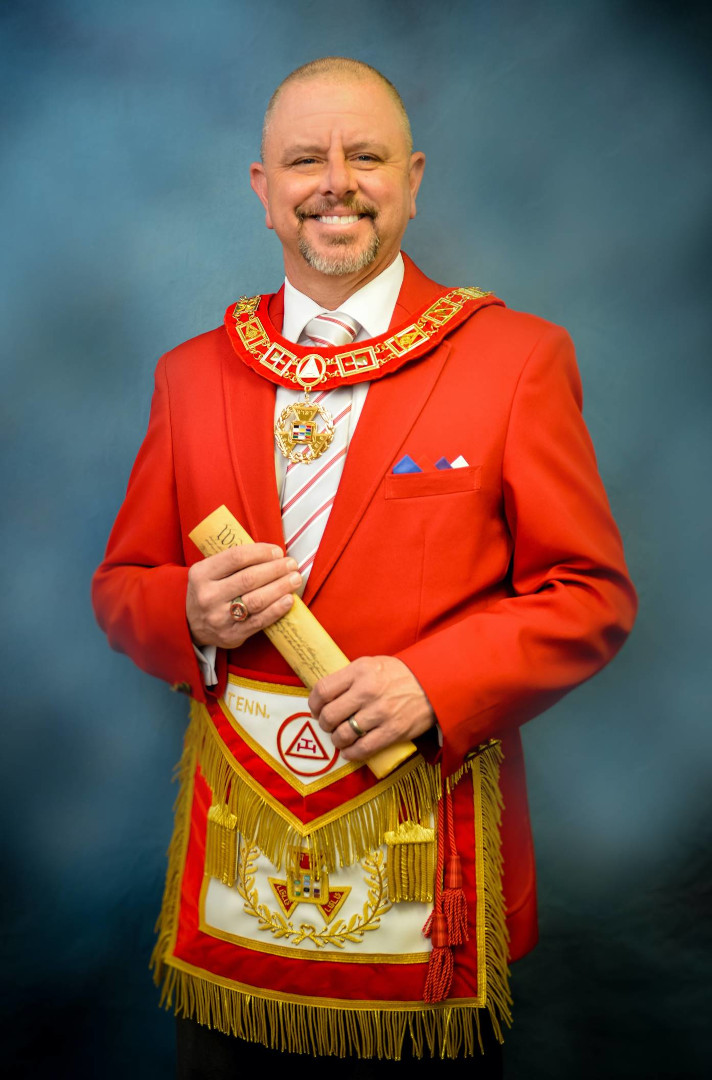 Joseph Edward Byrd was born into a Masonic family on Sept. 27, 1971 in Greeneville, Tennessee.

Both Companion Byrd and his wife, Dr. Suzanne Byrd, are educators. Joe was educated in the Greene County School System, earned a Bachelor of Arts in Mass Communications from East Tennessee State University, and earned a Master of Arts in Teaching at Tusculum University. He is currently a U.S. Government teacher and former coach at West Greene High School.

Companion Byrd is a veteran of the United States Navy (1989-93), asked his father for a petition when he returned home, and was raised to the sublime degree of Master Mason on Feb. 4, 1994 in Greeneville Lodge No. 3. He served the lodge as Worshipful Master in 2014.

He was exalted in Greeneville Chapter No. 135 RAM in 1994 and served as Excellent High Priest in 2014. Companion Byrd was greeted in Greeneville Council No. 77 CM in 1994 and served as Illustrious Master in 2015. Joe has received the Super Excellent Master degree, the Order of the High Priesthood, and the Order of the Silver Trowel.

He currently serves as Treasurer of all the Greeneville York Rite bodies.

Companion Byrd is a life member of Greeneville Lodge, Greeneville Chapter, Greeneville Council, Greeneville Commandery, and the Upper East Tennessee York Rite Association, of which he is a Past President. He is a member of Northeast Tennessee York Rite College No. 153 and is a recipient of the Gold Honor Award for faithful services to Masonry. Companion Knight Byrd has completed the self-study course through the York Rite Sovereign College of North America and has earned the honorific title of Companion Adept of the Temple. He has been presented a Certificate of Meritorious Service to the Grand Chapter of RAM.

He is a member of the St. Julian Conclave of the Red Cross of Constantine and Tennessee Priory No. 15 Knights of the York Cross of Honor. He was constituted a Knight Commander of the Temple in 2019.

He is a member of the Valley of Knoxville Scottish Rite.

Brother Byrd is a member of the Charles Newton Bush Past Masters Association and has received the Masonic Order of the Four Black Llamas and the Order of the Sword of Bunker Hill.

He has served on the Grand Lodge of Tennessee Education Committee. Brother Byrd is a member of the Tennessee Lodge of Research.

Companion Byrd is the fourth great grandson of Rev. Stephen Brooks (1764-1855; Greeneville Lodge No. 3), who was chairman of the committee that petitioned the Grand Lodge of North Carolina to form the Grand Lodge of Tennessee, served as first Grand Chaplain of the state, and also served as a delegate to help draft the Tennessee state constitution. Joe has served as historical advisor on Masonic matters in a book about Rev. Brooks.

Before beginning his career in education, Joe had a long career in journalism as an award-winning sports writer, covering high school, college, and professional sports across the state of Tennessee. Brother Byrd also authored Greeneville Lodge No. 3’s history for the lodge website and is the lodge Historian. Joe has served on the board of directors for the Andrew Johnson Heritage Association in Greeneville, and has edited a book about East Tennesseans in the Civil War.