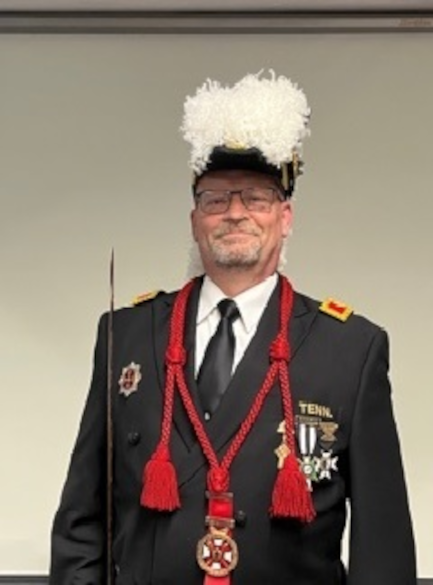 ​John Calvin Spencer was born in Springfield, Missouri on August 30, 1962, to the late Calvin R. and the late Bonnie L. Spencer. He was educated in the public schools of Illinois, California, and Tennessee. Brother Spencer spent 30 years working in the food service industry/Restaurant management.

He is married to the former Vicky L. Melton of Byrdstown, Tennessee and together they have 4 children and 6 wonderful Grandchildren.

Brother Spencer was raised a Master Mason on November 8, 2008, in Cookeville Lodge No. 266, serving as Worshipful Master in 2011, and has served as Lodge Secretary since 2012. He is a holder of the “Pin of Excellence” and serves the Lodge as a Funeral Master.

Companion Spencer became a plural member of Mt Olivet Chapter No. 87 and Sparta Council No. 128 in 2009 serving as High Priest and Illustrious Master respectively in 2011.

Companion Spencer received the Knight York Cross of Honor in March of 2015.

Brother Spencer received the degrees of the Scottish Rite in Valley of Chattanooga  in 2009 serving as President of the Chattanooga Scottish Rite Society in 2013, and currently serves the Valley as Wise Master of the Chattanooga Chapter Knights of Rose Croix.  He also serves the Valley as Director of the Work, and a member of the SGIG Advisory Conference. He is a member of Chattanooga Chapter of Scottish  Knights of St Andrew serving as Secretary, 2013 – 2018.  He serves as Degree Master for the Sixth Degree ( 6 °). He was invested with the Rank and Decoration of Knight Commander of the Court of Honour (KCCH) on October 12, 2013, and Coroneted a Thirty-Third Degree Inspector General Honorary on December 11th, 2021.
He is a life member of Middle Tennessee York Rite Association serving as President in 2016. A member of the Middle Tennessee Past Master’s Association, Tennessee Priory No. 15 KYCH, The Tall Cedars of Lebanon Forrest 195, serving as Grand Tall Cedar in 2015. He is Past Excellent Chief of Gaelic Council No.60 Knight Masons. A member of Nicholas E. Oldham Council 378 Allied Masonic Degrees, serving as Secretary/Treasurer, 2013 – 2019. A member of Cherokee York Rite College No. 152, currently serving as Governor. Recipient of the Order of the Purple Cross in 2018.

A member of Ye Commemorative Order of St. Thomas of Acon Cornelius Chapel No. 22, The Tennessee Lodge of Research, The Worshipful Society of Free Masons (The Operatives) Solar White Quarry. A member of The Ancient and Heroic Order of the Gordian Knot Tennessee Synod No. 1, The Masonic Order of Athelstan, Court of North Carolina No. 73 as well as Tennessee Court No. 122. A member of The Tennessee College Masonic Societas Rosicruciana in Civitatibus Foederatis, and Holy Manger Tabernacle No. XLVIII, Holy Royal Arch Knight Templar Priests.

Sir Knight Spencer was elected Eminent Grand Captain General on March 27, 2018, advancing each year with the exception of 2020 when no elections were held, and was elected Grand Commander on March 22, 2022.