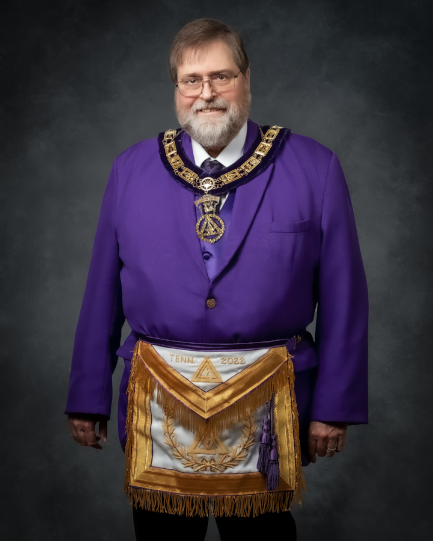 William Alan “Bill” Peck was born on July 3, 1958 in Minneapolis, MN. The son of William Richard Peck and Marilyn Jean Kunnen. He graduated from the University of Memphis in 1984 with a Bachelor of Finance degree. He has worked for several companies applying his Information Technology skills and is currently employed with Amador of America as an IT support Specialist.

Brother Peck is married to Terry Lynn Peck of Memphis, TN. The couple recently celebrated their 42 Anniversary. They have one son and two daughters, aged 31, 29 and 19.

He was raised a Master Mason on June 29th, 1987 in Woodlawn #211 and served as Worshipful Master in 1992 and 1996. He served as Secretary, Instructor, Lecturer and historian After the consolidation of Woodlawn with Bartlett #697, Brother Peck became a life member of Bartlett #211. He has served as Secretary, Instructor, lecturer and Historian. He also served the Grand Lodge as a member of the Long-Range Planning and Information Technologies Committees since 2016 as well as the Board of Relief (Masonic) since 2021.

He is a member of Memphis Valley Scottish Rite Bodies where he served as Wise Master from 2015 – 2016.  He was accorded the rank and decoration of Knight Commander Court of Honor in 2001.  He was Coroneted Inspector General Honorary 33° in 2013.

He is a member of Woodlawn #74 Order of the Eastern Star where he has served as Worthy Patron numerous times.

Brother Peck is a Past Governor of West Tennessee York Rite College #141, Past Master of Tennessee Lodge of Research, Past Master of West Tennessee Past Masters Association, Past Excellent Chief of Tralee Council #41 Knight Masons, and Past Sovereign Master of Emerald Isle #346 Allied Masonic Degrees. He is a member of St. Stephens Conclave Red Cross of Constantine, Rosslyn Chapel No. 33 St Thomas of Acon and Tennessee court #133 Masonic order of Athelstan
Exalted in Penn Chapter No.22 on Feb 20 1993. Companion Peck is a life member and served as Excellent High Priest in 2013. He received the Order of High Priesthood in 2014. He served the Grand Chapter as Excellent Grand Royal Arch Captain in 2016-2017 under MEGHP David Clinton Swaim.
He was greeted in Eureka Council No.6 on Feb 20, 1993. He is a life member, having served as Illustrious Master in 2014. He received the Order of the Silver Trowel in 2015.
Sir Knight Peck was knighted in St Elmo Commandery No.4 on 2/27, 1993. He is a life member and served as Eminent Commander in 2015, receiving the Knight Crusader of the Cross that same year.
In the Grand Council, Companion Peck was elected Grand Captain of the Guard on March, 2018 and has progressed each year being elected Most Illustrious Grand Master of Cryptic Masons of Tennessee March 21, 2022.