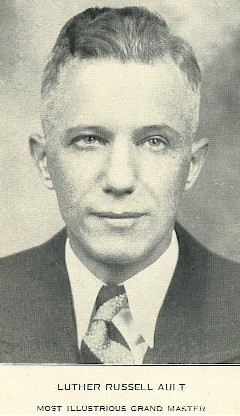 Born March 30, 1892, at Corryton, Know County, Tennessee, the son of Alfred Leon and Jona Rutherford Ault. He was educated in the public schools of Know County and the Dayton Engineering Laboratories Company of Dayton Ohio,

He was anointed in the Holy Order of High Priesthood at Nashville on January 28, 1930.

He was one of the organizers of the Tennessee Council Thrice Illustrious Masters (order of the Silver Trowel), and served as its first T.I.M. in 1940.

He was one of the organizers and it Past prior (1st Prior) of Tennessee Priory No. 15, K.Y.C.H.

He received the Scottish Rite degrees at Nashville in May 1943, and became a charter member of the Knoxville Bodies in 1945.