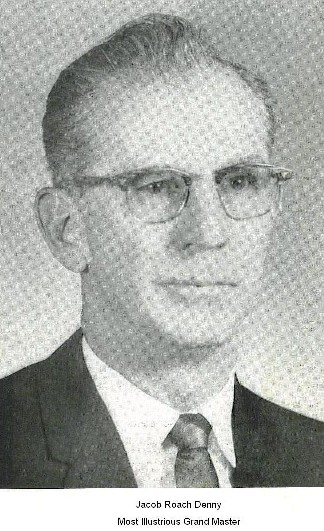 Born in Campbell County, Tennessee, near LaFollette on January 5, 1909. He is the
son of the late Luke Kenneth Denny and Francis Ora Roach Denny.

He was educated in the public schools of Campbell County, University of Tennessee,
Georgia – Carolina School of Commerce and LaSalle University.

He was an Engineer with the Tennessee Department of Highways until 1937. Since then he
has been an executive with B. G. Young and Sons, Inc., and Unaka Paving Company, Inc., highway construction firms of Johnson City.

For years he has been Secretary of the Johnson City Tobacco Board of Trade and the
Democratic Primary Election Commission of Washington County.

He was married to Eunice Juanita Hartsell on August 11, 1934, who passed away on April
29, 1960. To this union were born two daughters, Janice Louise (Mrs. William W. Bain, Jr.),
Nashville and Cynthia Frances (Mrs. Jerry Hyde), San Pedro, California. He has one grandson, William Worthington Bain III. On August 3, 1962, he was married to Kathleen Bain.

He became a Knight of the York Cross of Honour in Tennessee Prior No. 15 at Nashville on
August 4, 1961.

He received the Eastern Star Degree in Nolachuckey Chapter No. 194 on October 8, 1964.

He is a member of St. Mathias Conclave, Red Cross of Constantine at Knoxville.

He is a member of Charles Newton Bush Past Masters Association and the York Rite
Association of Upper East Tennessee.

In the Grand Council, Royal and Select Masters of Tennessee, he was elected Grand Steward
on March 21, 1960, and has advanced each year, being elected Most Illustrious Grand Master on March 21, 1966.