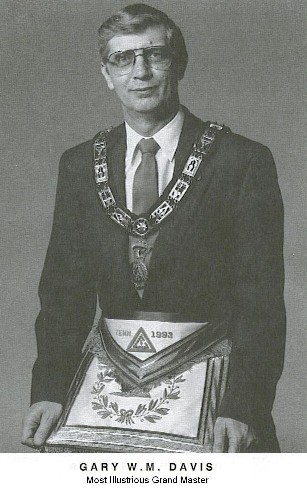 Born October 29, 1949 in Washington County, Tennessee, the son of Fred and Ruby Mays Davis. He was educated in the public schools of Unicoi County and The University of Tennessee at Knoxville.

Companion Davis is self employed in the wo way radio sales and service business and actively
involved in the area radio communication club.

He is now serving as a board member and past chairman of the Johnson City Civil Service
Commission and attends Skyline Heights Baptist Church.

Companion Davis was married to Brenda Presley on June 15, 1968 and they have one son, Craig Steven of Johnson City.

Brother Davis was raised in Johnson City Lodge No. 486 on October 24, 1977 and served as
Worshipful Master in 1981 and has served as secretary since 1982. Brother Davis has served the Grand Lodge as a member of the Dispensation and By-Laws Committee and District Chairman of District No. 29.

He was exhalted in Thomas E. Matson Chapter No. 131 on May 13, 1978 and served as High
Priest in 1983. He received the Order of High Priesthood on March 21, 1983 and is currently serving as an officer in that body. In the Grand Chapter, he served as Grand Principle Sojourner in 1985.

Companion Davis was greeted in Holston Council No. 101 on May 13, 1978 and served as
Illustrious Master in 1984. He received the Order of Silver Trowel on March 21, 984 and is
currently serving as Illustrious King of that body.

Sir Knight Davis was knighted in Watauga Commandery No. 25 on May 14, 1978 and served as
Eminent Commander in 1989. He was inducted into the Knights Crusader of the Cross on April 21, 1989 and served on the By-Laws Committee of that body in 1990. In the Grand Commandery, he is currently serving on the Credentials Committee.

He was inducted into Tennessee Priory No. 15 Knights of the York Cross of Honour on March
26, 1990.

Brother Davis in Past President of the Upper East Tennessee York Rite Association, charter
member and Past Governor of the Northeast Tennessee York Rite College No. 153 and received the Purple Cross in 1992, Past patron of Nolachuckey Chapter No. 194 Order of the Eastern Star. He is a member of Jericho Shrine Temple, Royal Order of Scotland, Knoxville Scottish Rite Bodies, Tennessee Lodge of Research, Charles Newton Busch Past Masters Association and Tralee Council Knight Masons on the U.S.A.

Companion Davis was elected Grand Captain of the Guard on March 26, 1990 and advanced each year being elected Most Illustrious Grand Master on March 23, 1993.