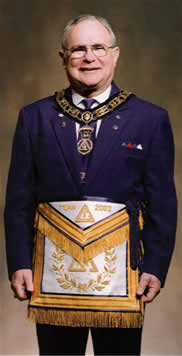 Born September 6, 1940 in Erwin, Tennessee the last of four children to Lawson
David and Phoebe Peterson, both now deceased. Companion Peterson was educated in the Erwin Public Schools and graduated from Unicoi County High School in 1958. He then entered DeVry Technical School in Chicago and graduated with an associate degree in Electronic Controls for Automation.

He began his working career at Raytheon Company in Bristol, Tennessee during 1960 as an
Electronics Technician. In 1970, he began work for Formex Company in Greeneville, Tennessee as a Systems Analyst/Programmer. Here he met Sandra Carol Franklin and they were married on October 5, 1974. They have shared 3 children; Phoebe Lynn Peterson, who is an office manager for the Dairy Science Department of Virginia Tech University and has one daughter, Rachel; Paul David Peterson, who is a mechanic for East Tennessee Rent-All and, along with his wife Connie, has a son, Seth Hunter and a daughter Kyla Marie; Paula Carol Taylor, who is an O. R. Nurse at Tacoma Hospital and, along with her husband Rodney, has 2 daughters, Cheyenne and Hannah. During 1980, Companion Peterson made a career change becoming employed by the Philips Consumer Electronics Company as a Systems Analyst from which position he plans to retire during the year 2003.

He received the Knight York Cross of Honor on March 22, 1983. He and Sandy served as Worthy Matron and Worthy Patron of Greeneville Chapter No. 223 Order of the Eastern Star during 1983. He is also a member of the Tennessee Lodge of Research, Allied Masonic Degrees, Upper East Tennessee York Rite Association President 2005-2006, Northeast Tennessee York Rite College No. 153 where hepresently serves as Chancellor, received the Order of the Purple Cross in 2002, Masonic SocietasRosicruciana in Civitatibus Foederatis, Red Cross of Constantine, Knight Masons, and is a member ofthe Chattanooga Scottish Rite Bodies having received the Scottish Rite Degrees in 1976.

In the Grand Council, Companion Peterson was elected Grand Captain of the Guard on March 22, 1999 and has progressed each year being elected Most Illustrious Grand Master, Cryptic Masons of Tennessee March 25, 2002.