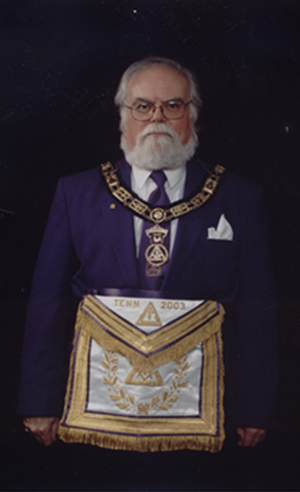 Most Illustrious Past Grand Master, Cryptic Masons of Tennessee, 2003-2004 Illustrious Brother and Reverend Donald Edgar Brooks was born into the home of the Reverend Weldon F. Brooks, a Baptist Minister, and Edna Mae (Taylor) Brooks, a nurse, in Alvin, TX, in 1946. Don completed High School in Woodlawn, Tennessee and later graduated from Austin Peay State University, Clarksville, Tennessee with a BA in English/Speech & Theater. He taught one year in the Clarksville-Montgomery County school system the moved to Saulsbury, Tennessee, and taught school for ten years in the Hardeman County schools, leaving the classroom to become Director of Psychological Services. He earned his Masters in Education in clinical counseling and a Master of Arts in School Psychology from the University of Memphis. He was ordained a Deacon, then an Episcopal Priest in 1982, later enrolling in St. Luke’s Seminary, School of Theology, The University of the South at Sewanee, where he earned his Graduate Certificate in Anglican Studies. Father Brooks has served several congregations as Vicar or as Rector; as a special assistant and Pastor to the Bishop of West Tennessee, Examiner in Liturgical Theology, Homiletics and Canon Law for those seeking ordination in the Episcopal Church; Diocesan Program Director for Ministries in Small Congregations; and Diocesan Chaplain to the Order of The Daughters of the King, an order of sisters in the Episcopal Church. He is a member of the Emergency Pastoral Response Team of the Diocese, and has served as a Justice on the church Ecclesiastical Court.

Additionally, Brother Don has served as Chaplain to the Brownsville Police and Fire Departments, the Haywood County Sheriff’s Department, and the Haywood County Emergency Management Agency. He moved to Union City, Tennessee, where he serves as Rector of St. James’ Episcopal Church, Assistant Chief Chaplain and Chief Chaplain Training Officer for the Union City Police Department. He is a member of the Tennessee Public Safety Network Emergency Response and Debriefing Team, and served in this capacity with the Tennessee Team on the Gulf Coast following Hurricane Katrina.. Don has assisted Temple Adas Israel, Brownsville, (the oldest continuously functioning Jewish Congregation in Tennessee) as part-time visiting Cantor, and has written and had published a comprehensive history of the Congregation and served as a tour guide for their historic building.

Active in the York Rite Bodies of Tennessee, Don received the distinction of Knight York Cross of Honour in Tennessee Priory #15 on March 27, 1979 and he has served as the Grand Chaplain/Grand Prelate in the Grand Chapter, the Grand Council, and Grand Commandery of Tennessee.

He served as Worthy Patron of both Ruth Chapter #35 and Haywood Chapter # 357, Order of the Eastern Star and is a member of Faith Court #15, Order of the Amaranth; The Royal Order of Scotland; Tralee Council #41, Knight Masons; West Tennessee College #141, York Rite Sovereign College and the recipient of the Grand York Rite College Service Award in 1998. Don is a Knight Companion of St. Stephen’s Conclave, Red Cross of Constantine; Nicholas E. Oldham Council #378 Allied Masonic Degrees; Zaman Grrotto; The Philalethes Society; the Scottish Rite Research Society; the Tennessee Lodge of Research, where he is a published author; Life Member of the West Tennessee DeMolay Alumni Association; recipient of the DeMolay Legion of Honor (HLOH)2006; and is a former Rainbow Chapter Dad, and has been elected to membership in The Commemorative Order of St Thomas of Acon.

Brother Brooks is a member of the Scottish Rite Bodies of the Valley of Memphis, Orient of Tennessee where he has served as Chaplain to the Bodies, and is a ritualist and member of the Director’s Staff. He was decorated a Knight Commander of the Court of Honor in 1979 and coroneted as an Inspector General Honorary, 33o December 13, 1999.

In the Grand Council, Cryptic Masons of Tennessee, Illustrious Brother Brooks was elected Grand Captain of the Guard in March of 2000 and progressing each year to be elected as Most Illustrious Grand Master on March 24, 2003.