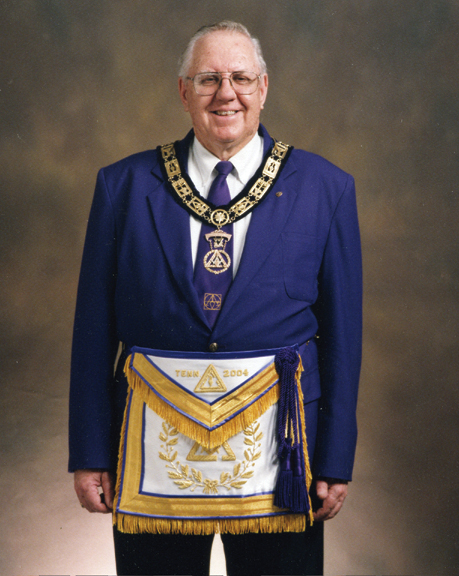 W e pay tribute to companion Stevens in his passing on November 18, 2006.

He was born on May 2, 1940 in Hickman County, Tennessee, near Dickson, where he was raised and educated in the public school system. He was the third of five children, all who lived and worked on the family farm.

Companion Stevens moved to Nashville in 1958 and entered the work force and also pursued
additional education at the Watkins Institute, University of Tennesse, and Wake Forest University.

His first employer was the Nashville Bible house where he worked as an accounts receivable clerk. Later, he worked as an investigator and then as a working supervisor for a rental credit company in Cookeville.

Companion Stevens returned to Nashville where he took the position as treasurer for the Home Products Company, then as a sales representative with the Metropolitan Insurance Company. He then opened and operated his own insurance brokerage firm for seventeen years.

He was a member of and served as a past Presiding officer for:

In addition, he was a member of the John B Garrett Eastern Star, and served as Worthy Patron in 1993

In 2001, he was invested with the decoration of Knight Commander Court of Honor in the Scottish Rite Valley of Nashville. He was a member of the Old Hickory Red Cross of Constantine, Royal Order of Scotland, and the National Sojourners. He was a member of the Middle Tennessee York Rite Sovereign College, where he received the Order of the Purple Cross in 2004. He was initiated into the Societas Rosicruciana and Al Menah Shrine in Nashville. In 1999, he was the recipient of the Cryptic Mason of the Year award. He also served as recorder of Nashville Council and Nashville Commandery No 1 for many years.

In addition, in 2001, he took a full time position with the Grand Lodge as the Secretary-
Treasurer of the Masonic Widows and Orphans Home fund of Tennessee where he worked very diligently to keep this fund solvent.

Companion Stevens was very active in civic, church and fraternal organizations during most of his adult life and was a local and state officer in the Jaycees where he received numerous honors.

As a member of the Cane Ridge Cumberland Presbyterian Church in Antioch, Companion Stevens served as a deacon or elder for fifteen years and, in addition, taught Sunday School for more than twenty years.

His wife of fourty-four years is the former Jimmie Blackstock of Decaturville, Tennessee was his chief supporter and assett and they are the parents of one adult daughter, Carla.

It has often been said that “what we take with us when we leave this earth is what we leave
behind”. Companion Stevens certainly made many contributions and left a great legacy to his family, church, community and to the fraternity. We extend our deepest sympathy to his family and many friends.