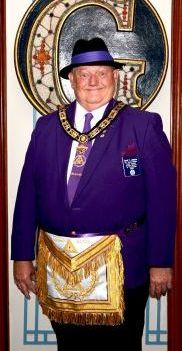 Companion Johnson attended the public schools of Memphis and Shelby County and graduated from Westwood High School in 1968.

He was a Boy Scout and received the rank of Eagle Scout in 1965.

He became a volunteer for The American Red Cross in 1969 and is still active. He is also a
volunteer with the Fayette County Emergency Management Agency.

Brother Johnson was raised to the sublime degree of Master Mason in DeSoto Lodge #299 on August 23, 1979 and is Past Master. He is a plural member of Somerville Lodge # 73, life member of The Memphis Scottish Rite Bodies where he serves as assistant stage director. He is Past Patron of Bartlett OES, member of Al Chymia Shrine, Order of Quetzalcoatl, Zaman Grotto, the Royal Order of Scotland and is Past President of the Shelby County Scottish Rite Club.

David is KYGCH, KCCH, holder of the Order of the Purple Cross, 33rd Degree, member of the Yeomen of York, Missouri Lodge of Research, Masonic Veterans Association Knight Commanders, Allied Masonic Degrees, Red Cross of Constantine and Past President of Memphis YR Association.

Companion David was elected Grand Captain of the Guard of The Grand Council Cryptic Masons of Tennessee in March 2006 and has progressed each year, being elected Most Illustrious Grand Master on March 23, 2009.