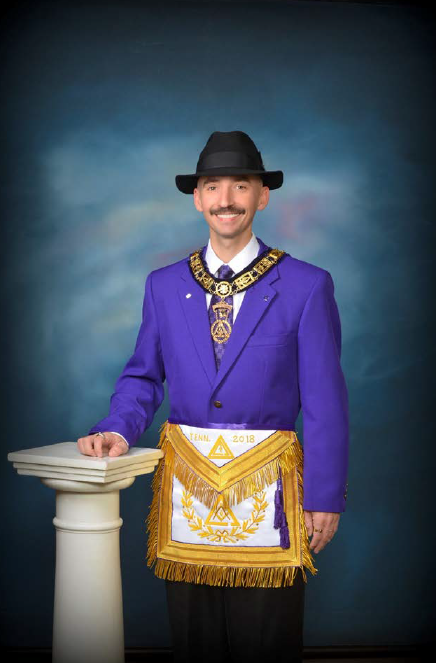 Born in Madison County, TN on November 13 1981, the son of Phillip  and Ellen Lacy. He was educated in the Jackson-Madison County School System and graduated from Lambuth University in 2005. He earned a Master of Business Administration from the University of Tennessee at Martin in 2009. He is presently a co-owner at Lacy’s 1st Choice Locksmith, LLC, where he works with his dad and has the title Certified Registered Locksmith. Brother Lacy was married to Olivia Remirez in 2007 and they had a daughter, Jasmine. David and his family attend Northside United Methodist Church in Jackson.

Brother Lacy, a fourth generation Mason, was raised a Master Mason in St. John’s Lodge #332 on June 27, 2005 and served as Worshipful Master in 2009 and 2013. Brother Lacy serves on the scholarship committee at his lodge. He has served the Grand Lodge as Grand Sword Bearer in 2012. He is the Grand Representative to Puerto-Rico. He also serves as District Deputy Chairman for District 4.

Companion Lacy was greeted in Jackson Council #13, at Jackson, in October 2006, and served as Illustrious Master in 2008. He received the Order of the Silver Trowel in 2008. He is also plural member of Roy Holland #89.

Sir Knight Lacy was knighted in Jackson Commandery #13, at Jackson, in October 2006, and served as Eminent Commander in 2009. He received the Knight Crusader of the Cross in 2009. Sir Knight Lacy served the Grand Commandery as Grand Sword Bearer in 2011. He serves as the Ritual and Membership Committees in the Grand Commandery. He is also a plural member of Union City Commandery #29 and Lexington #36. He received the Scottish Rite degrees in the Valley of Memphis in 2006 and was decorated Knight Commander of the Court of Honor in 2011.  His other Masonic affiliations include: West TN Past Master’s Association; Jackson Scottish Rite Club (Secretary); Tennessee Priory #15; KYCH; West Tennessee York Rite Association (Past President); West Tennessee York Rite College #141; West Tennessee Chapter Tall Cedars of Lebanon #213 (PGTC);  Tralee Council #41 Knight Masons; Yellow Dog degree; Masonic Order of the Four Black Lamas.

He was elected Grand Principal Conductor of the Work on March 21, 2016 and progressed each year being elected Most Illustrious Grand Master, Cryptic Masons of Tennessee on March 26, 2018.