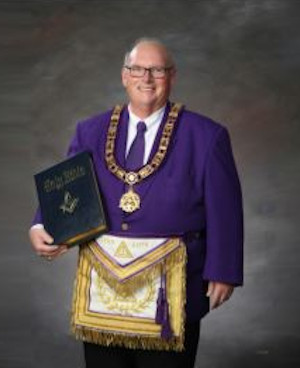 Born on November 24th, 1961 in Gainesboro TN, to the late Ernest Dow and the late Vera Lynch Carter of Granville TN. He attended the public schools in Manchester City and Coffee County, TN, graduating from Coffee County Central High School in 1980. He received his Bachelor of Business Administration from MTSU in 1983.

He is married to Amy Sue Bryan Carter, the daughter of the late William Boyd and the late Sue Jernigan Bryan of Hillsboro, TN, on June 2, 1984 in Manchester, TN.

He is employed with Verizon Wireless as a Data Analyst with Local Number Portability Operations in Murfreesboro, TN.

He was greeted in Manchester Council #133 (now Tullahoma Council #102) on 2/20/1986, serving as Thrice Illustrious Master in 1988. He is currently serving on the Dispensation and Bylaws Committee as Chairman for the Grand Council and has done so since 2006.

He was knighted in Murfreesboro Commandery #10 KT on 3/15/1986, and a charter member of Manchester Commandery #40 in 1992, serving as Eminent Commander in 1993. He served as Grand Sentinel of the Grand Commandery TN in 1997. He received the Knight Commander of the Temple, Grand Encampment Knights Templar, in 2008.

He was elected as Grand Captain of the Guard of the Grand Council on March 21, 2016 and progressed each year, being elected Most Illustrious Grand Master, Cryptic Masons of Tennessee, on March 25, 2019.