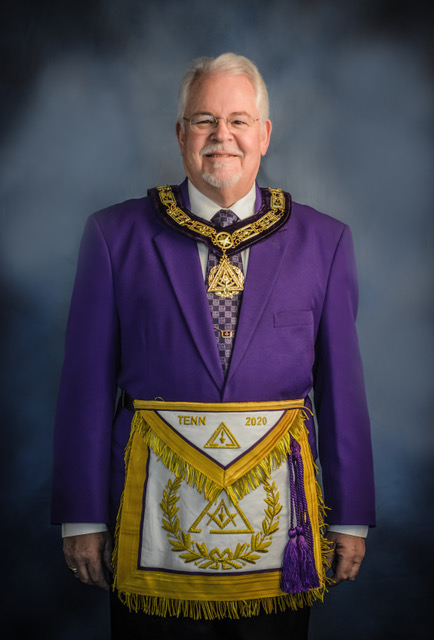 John Ray Cantrell was born the son of Glenn Ray and Mary Elizabeth Cantrell on March 5, 1955 in Reidsville, North Carolina. He was educated in Hendersonville City Schools and Blue Ridge Technical College, located in Hendersonville, N.C. He worked for Eaton Corporation and Rockwell International while in North Carolina. He is retired from the City of Kingsport Engineering department as a Drafting Technician.

Brother Cantrell is married to the former Cindy Pegram. They have two children, Nicholas and Peyton.

Exalted in Lynn Bachman Chapter No.195 on April 15, 2006, Companion Cantrell is a life member and served as Excellent High Priest in 2009. He received the Order of High Priesthood in 2009. He served the Grand Chapter as Excellent Grand Master of the First Veil in 2014-2015 under MEGHP Robert G. Officer.

Sir Knight Cantrell was knighted in Kingsport Commandery No.33 on April 22, 2006. He is a life member and served as Eminent Commander in 2012, receiving the Knight Crusaders of the Cross that same year. John was awarded the Membership Achievement Medal from the Grand Encampment of Knights Templar USA in 2013.

In the Grand Council, Companion Cantrell was elected Grand Captain of the Guard on March 21, 2017 and has progressed each year being elected Most Illustrious Grand Master of Cryptic Masons of Tennessee March 23, 2021.