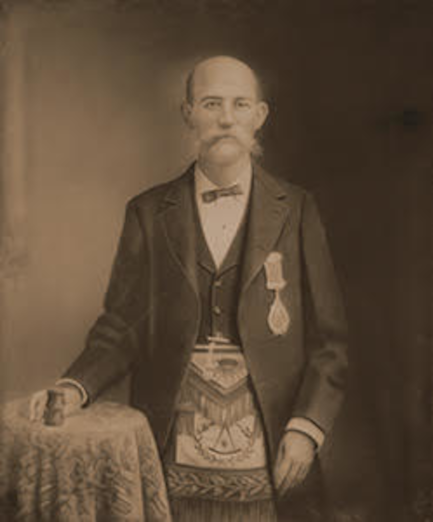 Joseph Holmes Bullock was born August 6, 1846 in Henry County, near Paris, Tennessee.  His father was a sturdy, strong-minded farmer, a firm believer in the Christian religion and a preacher in the Protestant Methodist Church.  His mother was an exemplary member of the Cumberland Presbyterian Church.

One night in May 1870, the Senior Deacon of Paris Lodge 108, reported “an alarm at the door,” and on responding there stood without a tall and symmetrical young man, seeking admission into this ancient and honorable fraternity.  In June he was passed to the Degree of Fellow Craft, and July 15, was raised to the sublime Degree of a Master Mason.

In December 1870, he became a Royal Arch Mason.  In 1873 he took the Council Degrees, and entered the sacred precincts of the asylum and was dubbed and created a Knight Templar.  The records show that he was several times elected as Master of the Lodge, High Priest of the Chapter, and Eminent Commander of the Commandery of Knights Templar.  In 1879, in the Grand Chapter, he was elected Most Excellent Grand High Priest.

In the Grand Lodge for many years he served on various important committees, notably, that of Ways and Means, in which latter capacity he became a strong supporter of the Widows and Orphans’ Home enterprise, being always anxious to economize the funds of the Grand Lodge so as to have a surplus to turn over to that institution.  In 1896 he was elected Junior Grand Warden.  Senior Grand Warden in 1897; Deputy Grand Master in 1898, and in January 1899, received the highest honor within the gift of the Fraternity of Tennessee by being chosen Grand Master.

Brother Bullock was married to Mary Ettlinger in 1884.  To them were born three daughters and one son.  The little boy died the year his father served as Grand Master.  He was a member of the Cumberland Presbyterian Church.  He was a merchant, bookkeeper and Collector of Internal Revenue in his district.

The night of January 1, 1902 found him at the midweek prayer meeting of his church.  He had just recorded on the minute book an item of business transacted by the session of his church when his pencil fell from his nerveless grasp, and his body yielding to a fatal stroke, fell across the desk.

He was buried in Paris City Cemetery at Paris, Henry County, Tennessee.