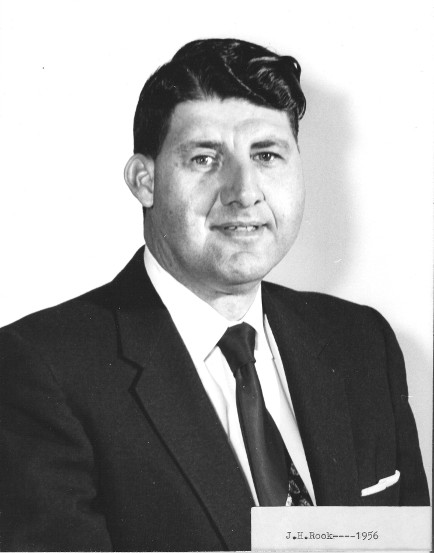 James Herbert Rook was born February 6, 1918 in Hardeman County, near Toone, Tennessee, the son of Carl Grose and Emma Lee Hanna Rook. He was educated in the public schools of Hardeman County and the Memphis public schools. He served in the Army Air Corps during World War II, in the Pacific theatre. Brother Rook retired from the U.S. Postal Service in 1974. He had been employed with this service since 1946

and retired as a supervisor. On June 29, 1950 he was married to Addie McAden. They have one daughter, Mrs. Kenneth (Rebecca Dinah) Wages. Brother Rook is a member of Everett United Methodist Church, where he has served as a Sunday

school teacher for a number of years and as a member of the administrative board.

Companion Rook was greeted in Eureka Council #6 on Nov. 5, 1949, served as Illustrious Master in 1955 and served as Recorder from 1961 to 1970. He received the Order of the Silver Trowel in 1955. In 1967 he served the Grand Council as Grand Conductor of the Council. He also served as Illustrious King of the Tennessee Council of

Anointed Kings in 1972 and in 1977 was award the Cryptic Mason of the Year medal by the General Grand Council.

In 1973-74 he served the Grand Commandery as Grand Standard Bearer. He was received as a Knight of the York Cross of Honour in Tennessee Priory #15 on Aug. 28, 1965. Brother Rook is a member of the Memphis Scottish Rite and a IGH.

Brother Rook is a member of Al Chymia Shrine Temple and Al Chymia Past Master’s Association. He is also a member of St. Stephen Conclave, Red Cross of Constantine, the Royal Order of Scotland, West Tennessee York Rite College #141, Tralee Council #41 Knight Masons and Woodlawn Chapter #74 O.E.S. He holds the Honorary Legion of Honor, Order of DeMolay. He served as President of the Memphis Area York Rite Association on 1966 and served as secretary of the Memphis Masonic Veterans Association in 1972-89. In 1975 he served the Grand Chapter as Grand Royal Arch Captain. In 1977 he was elected Grand Captain of the Host of the Grand Chapter, Royal Arch Masons in Tennessee and has advanced each year, being elected Most Excellent Grand High Priest on March 25, 1980.

Brother Rook continued to serve his Lodge in many capacities, and served as Chaplain through the year 2000, when he moved to Eads to live with his daughter. He later moved with his daughter and son in-law to McKenzie TN where he lived until he passed on May 31, 2012.