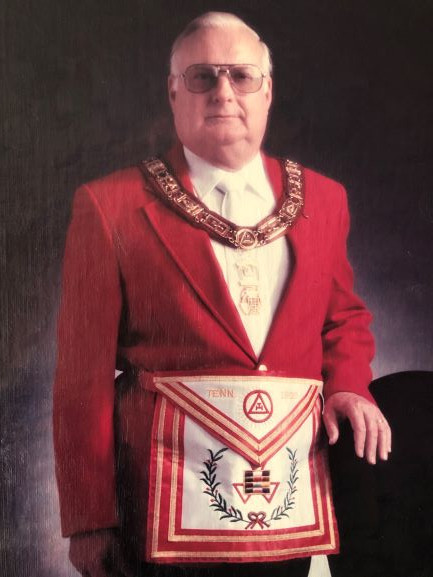 Most Excellent Past Grand High Priest Robert E. Gooch was born on November 29th, 1928 in Russellville, Kentucky, the son of Thomas Perry and Pauline White Gooch. He was educated in the public schools of Olmstead, Kentucky.

On December 17th, 1950, he married Wanda L. Whitcomb. At the time of his passing, Companion Gooch and Wanda enjoyed 70 years of marriage.

Companion Gooch was greeted in Murfreesboro Council No. 115 on September 21st, 1965 and served as Illustrious Master in 1968. He received the Order of the Silver Trowel on March 25th, 1968. He later transferred his membership to Clarksville Council No. 105, serving as Recorder for many years. In the Grand Council, he served on the Ritual Committee from 1979 to 1985.

Sir Knight Gooch was knighted in Murfreesboro Commandery No. 10 on October 11th, 1965, and transferred his membership to Clarksville Commandery No. 8, serving as Eminent Commander in 1978 and again in 2010. He was also Recorder for a number of years. He received the degree of Knight Crusader of the Cross in 1987. In the Grand Commandery, he served on the Ritual and Tactics Committee and was Grand Instructor-Inspector for many years.

He received the degrees of the Scottish Rite in 1977 and was a member of the Valley of Nashville. He was invested with the rank of KCCH in 1981 and coronated as a 33rd, IGH in 2009. He was also Secretary of the Clarksville Scottish Rite Club.
Companion Gooch was inducted into Tennessee Priory No. 15, Knights of the York Cross of Honor on March 23rd, 1982, and was also a holder of the KYGCH.

He was a member of Old Hickory Conclave, Red Cross of Constantine, Clarksville Chapter No. 202, Order of the Eastern Star and served as Worthy Patron in 2005 and 2010. He was also a member of Parthenon Court No. 9, Order of the Amaranth and in 1984-1985, he served as Grand Royal Patron of the Grand Court of Tennessee. He was a member and Past Watchman of Shepherds of Disciple Shrine, Order of the White Shrine of Jerusalem, as well as the Royal Order of Scotland, Past President and Adjutant of Fort Campbell Chapter No. 177 National Sojourners, Old Hickory Camp Heroes of ’76, and numerous other Masonic bodies.

Companion Gooch laid down his working tools and returned home to the Celestial Lodge on January 17th, 2021. When not involved in Masonry, he enjoyed gardening, traveling, and cheering on the Tennessee Titans. His contributions to the Masonic Order can never be overstated, and they should serve as an example for Masons to follow with fervency and zeal.