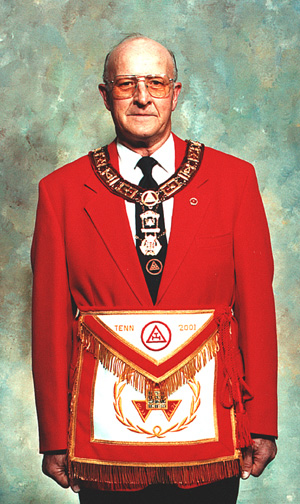 Mack Evans Johnson was born October 11, 1942 in Parsons, Tennessee, the son of Joseph Allison and Mondelea Johnson. He was educated in the public schools of Decatur County, Tennessee. He served in the United States Air Force as an aircraft mechanic, volunteered in October 1960 and honorable discharged in October 1964. He has been a farmer, a service manager at a car dealership, a heavy equipment operator and a millwright in construction, before becoming disabled in 1988 with a heart attack. He is a member of New Prospect Missionary Baptist Church in Holladay, TN.

He was married to Jeanetta Gibson on March 29, 1961, until her death on December 4, 2005. They have two children, a son, Mark (Janea) and a daughter, Sandi (Scott) and two granddaughters, Kara and Joelle.

Brother Johnson was raised a Master Mason on September 29, 1978 in Mt. Carmel Lodge No. 333 in Holladay, Tennessee. He transferred to Parsons Lodge No. 586 at Parsons, Tennessee in 1981. He served as Worshipful Master in 1989. He was elected secretary in 1992 and is presently serving in that office. Serving in the Grand Lodge on the Ways and Means Committee 2005-2010. Grand Representative of Grand Lodge of Tennessee to Ceara, Brazil.

Companion Johnson was exalted in Lexington Chapter No. 168 on October 31, 1984. Served as High Priest during 1992 and 1993. Presently serving as secretary. He received the order of High
Priesthood in 1998. Served as Grand High Priest, Grand Chapter of Royal Arch Masons of Tennessee 2000-2001. Grand Representative to Switzerland. Grand Council Order of High Priesthood serving as Chaplin.

Member of West Tennessee York Rite College, Past Governor and received the Order of the Purple Cross in July 2001. Installed Deputy Grand Governor of the Tennessee, July 2006.

Member of Tralee Council No. 41 Knight Masons, Past Excellent Chief.

Member of Tennessee Lodge of Research

Member of Masonic Veterans Association of Tennessee, Past President.

Member of Knight Commanders Memphis Asylum No. 1, Past Commander.

Member of Order of Eastern Star, Parsons Chapter No. 127, Past Patron, presently serving as
secretary.

Member of The Royal Order of Scotland.

He received the Scottish Rite Degrees in Memphis Consistory, received KCCH in 1997and Inspector General Honorary, 33° Degree in 2007. Past Master of Kadosh. Presently serving on Advisory Board at Large.