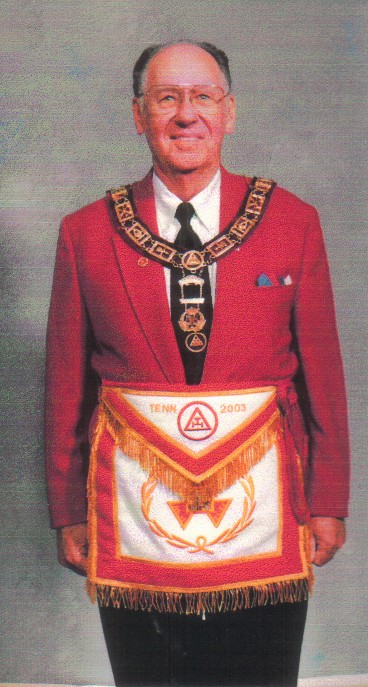 Born August 1, 1932 in Church Hill, Tennessee the first of five children to Daniel Craft and Elsie Barrett Jeter. Companion Jeter was educated in the Hawkins County Public Schools and graduated from Church Hill High School in 1950. He attended the University of Tennessee, Knoxville, TN 1951-1953.

He entered the US Army in 1953 serving in Korea, honorably discharged in 1960 after serving in the USAR (Inactive Reserve)

Companion Jeter married Nancy Lee Overbey on February 22, 1956. They have one daughter, Nancy Dee Jeter. Companion Jeter retired in 1994 after being employed by Moreland McKesson Chemical, Southern Packaging, and Yearing Construction Co. Companion Jeter was an official in NASCAR timing and scoring Lonesome Pine Speedway, Kingsport Speedway, and Bristol Raceway and others. Brother Jeter began his Masonic career by being raised to the sublime degree of Master Mason in Clay Lodge No. 386 on March 15, 1971. He served as master in 1982. Companion Jeter received the Royal Arch degree on May 15, 1973 in Church Hill Chapter No. 238 R.A.M. and is a charter member. Companion Jeter served as High Priest in 1982. He received the Order of High Priesthood on March 22, 1982. In Grand Chapter R.A.M. of Tennessee he is serving as Grand Representative of Newfoundland and has served on the committee of Advancement of Royal Arch Masonry and Master of the Second Veil in 1993. Companion Jeter received the Select Masters degree on June 11, 1973 in Kingsport Council No. 117 C.M. Sir Knight Jeter received the Order of the Temple on June 16, 1973 in Kingsport Commandery No. 33 K.T. Other Masonic affiliations; Fairview Chapter No. 80 Order of the Eastern Star; Northeast Tennessee York Rite College No. 153; Upper East Tennessee York Rite Association; Royal Order of Scotland; Knoxville Scottish Rite Bodies; Charles Newton Bush Masters Association; and Jericho Shrine Temple. Companion Jeter is also active in the Sullivan County Scottish Rite Club, Rogersville Shrine Club, and servers as a driver for patients to the Shrine Hospitals of Lexington KY and Cincinnati, OH.

In the Community Companion Jeter is a charter member of First Baptist Church of Church Hill, an life member of Church Hill VFW Post No. 9754, served as a member of the Hawkins County and Church Hill Honor Guard, Church Hill Senior Citizens, and Board of Directors and delivery of Meals on Wheels.