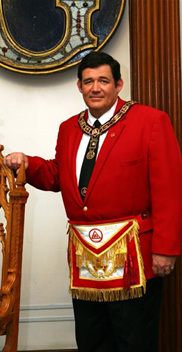 Born November 12, 1954 in Union City, Tennessee. His parents the late Richard and Imogene Pair had five children, the late Richard Jr, Stephen, Melissa Ann, and John Pair. His stepmother is Minnie McDaniel Pair and stepbrothers are Jeff and Barry McDaniel. Companion Pair married the former Betty Gail Thomas on June 9th, 1973, and they have two children. Erica Carol Gholson their daughter and her husband Jayme live in Franklin, Tennessee and Garret Douglas Pair their son lives in Hermitage, Tennessee. Both children have  graduated from college and are in the work force now. Erica graduated from Murray State University and Garret from Middle Tennessee State University.

Companion Pair was educated in the public schools of Union City and Obion County; graduating from Union City High School in 1972. He attended State Technical Institute in Memphis majoring in computer programming. Afterwards he attended the University of Tennessee majoring in industrial management. In 2006 he returned to the University of Tennessee to get his degree in Civil Engineering.

Companion Pair and his family are members of the First Baptist Church in Union City. He has
served as youth Sunday School Teacher, Deacon, Chairman of the Deacons, and Brotherhood President.

Companion Pair started his career with Goodyear Tire and Rubber Company on August 13,
1973. He worked from floor level work to a Production Specialist at the time of his retirement
thirty-two years later July 2005. He was awarded Top Ten Management, Area Manager of the month several times, and Area Manager of the year during his tenure. His last fifteen years he was responsible for the startup of new technology as it was introduced to the tire market. He graduated from the Obion County Leadership training and served as President of its Board of Directors. After retirement he attended Heartland Truck Drivers Institute and became employed by Star Transportation out of Nashville. He drove every state East of the Mississippi River until he decided to continue his education by returning to college.

Companion Pair served as Union City Councilman representing ward 6. He worked with the Cub Scouts and Boy Scouts of America. He started the Tiger cubs, served as a Den Leader, Assistant Cub Master, and Cub Master. He is a member of the honorable Brotherhood of the Order of the Arrow. He has served as an Assistant Scoutmaster, Scoutmaster, and Boy Scout Commissioner. He received the Daniel Carter Beard Masonic Scouter Award February 11, 2004

Companion Pair was initiated an Entered Apprentice Mason on July 18, 1986; passed to the degree of Fellowcraft on October 7, 1986; and raised to the sublime degree of Master Mason on November 14, 1986 in Union City Lodge #538 and served as Worshipful Master during 1997. He was elected Treasurer in 1998 till present. He also serves as a trustee. He is a member of West Tennessee Past Master Association and a proud member of the order of Yellow Dogs.

Companion Pair was exalted a Royal Arch Mason on April 10, 1989 Union City Chapter #132; and served as Excellent High Priest during 2001. He was elected Treasurer 2002 and still serves as such. He received the Order of the High Priesthood March 26, 2001.

Companion Pair was greeted in Union City Council No.122 Royal & Select Masters on April 16, 1990, and served as Illustrious Master during 2002. Now serves as Treasurer. He received the Order of the Silver Trowel on March 25, 2002. He served as Grand Master Personal Representative during 2003 and 2004.

Companion Pair was knighted in Union City Commandery No.29 Knights Templar on May 22, 1990 and served as Eminent Commander 2003 and now as Treasurer. He is a Life sponsor of the eye foundation and a member of the Grand Commanders Club.

Companion Pair is a Noble at the Al Chymia Shrine Temple where he serves as an Ambassador, and Past President of the Goodwill Shrine Club. He received the Order of Knight Crusader of the Cross on April 30, 2004. He received the Knights of the York Cross of Honor in Tennessee Priory No. 15, on April 19, 2005 and the Knights of the York Grand Cross of Honor on March 27, 2007.

Companion Pair is a 32nd Degree mason in the Ancient and Accepted Scottish Rite in the Valley of Memphis on April 4, 1987. He is also a member of the North West Tennessee Scottish Rite Club, Royal Order of Scotland, and Red Cross of Constantine.