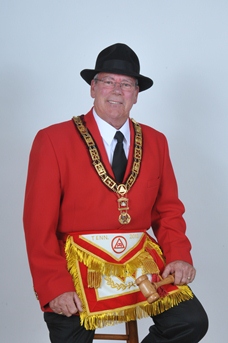 Born January 5, 1953 in Johnson City, TN. He is the son of Ralph C. and Nila Cash Friday.
One Brother: David Friday deceased.

Denny and Gay attend Greenwood Baptist Church in Johnson City, Tennessee ,where
he serves as Sunday School Teacher and Deacon,

Denny is a retired Telephone Lineman of 32 Years. He was educated in the Washington County public school system and graduated from Boones Creek High School in Jonesborough, Tennessee. Attended East Tennessee State University where he studied the Arts. Denny comes from a musical background and has been awarded several top honors for his musical ability including Banjo Performer of the Year and has performed with some of the best from the Grand Ole Opry.

Brother Friday was raised to the sublime degree of a Master Mason in Johnson City Lodge No. 486 on Oct 25, 2001. He served as Master of the Lodge in 2008 and was awarded Mason of the Year in 2009. He is currently serving as Chaplain.

He was exalted in Thomas E. Matson Chapter No. 131 on June 24, 2002 and served as High Priest in 2005. He received the Order of the High Priesthood on March 21, 2005. Companion Friday served as DDGHP for District 12 from 2005 to 2008 . He also serves the Grand Chapter of Royal Arch Masons as Grand Representative from Tennessee Wyoming

Companion Friday was greeted in Holston Council No. 101 on July 23, 2002 and served as
Illustrious Master in 2006. He received the Order of Silver Trowel on March 20, 2006 and served as Illustrious King of Tennessee Council of Anointed Kings in 2011-2012. He served the Grand Council as Grand Conductor of the Council in 2008.and serves the Grand Council of Cryptic Masons as Grand Representative from Tennessee to Nebraska.

He was made a 32nd degree Mason in the Ancient and Accepted Scottish Rite Bodies of Knoxville, TN in 2002 and currently serving as Captain of the Host and a member of the 14th degree team.

He is Past Patron of Nolichucky-Grand View Chapter No. 194, The Order of the Eastern Star, a
Member of the Royal Order of Scotland and a member of the High Council Masonic Societas Rosicruciana in Civitatibus Foederatis.

He was inducted into Tennessee Priory No. 15 Knights of the York Cross of Honour in 2009.

Brother Friday is a Charter Member of The Allied Masonic Degrees, Jacob R. Denny Council No.96 and a Charter member of Knight Masons of the U.S.A W.W. Cannon No.459.

He is also a Life Member of Johnson City Lodge No.486, Thomas E. Matson Chapter No. 131, Holston Council No.101 and Watauga Commandery No.25.

He was made a Noble of the Jericho Shrine Temple in 2001 and is Past President of the Washington Co Shrine Club where he also served with the Roadrunners. He was awarded Washington County Shriner of the year in 2005.