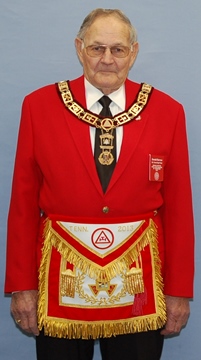 Born July 23, 1933 in Huntingdon, TN. He is the son of James E. and Sally Barrow(deceased). He has one brother and two sisters.

Sir Knight Barrow was Knighted in Paris Commandery #16. Inducted in to Tennessee Priory #15 Knights of theYork Cross in 1999.

Brother Barrow is a Member of:

Order of the Eastern Star