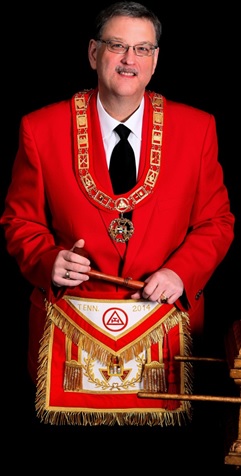 Born on July 30, 1966 to the late Manuel Franklin Officer and Ellen Glenn Officer in Sparta Tennessee. He is married to the former Lisa K. Smith and were wed on December 29, 1990 and they have one son Robert Jachin Officer (Jake). They are lifelong residents of Sparta. He has one brother Hugh Officer of Sparta and one sister Ann Norris (Deceased) of Oak Ridge.

He is employed in the White County School System as a Guidance Counselor at White County Middle School. He is also an adjunct faculty member at Motlow State Community College where he teaches psychology.

Robert is active in his community belonging to and participating in various community and civic activities. He is currently serving in his 4th term as Alderman for the City of Sparta and sits on the YMCA advisory board. He is a lifelong member of Sparta First United Methodist Church.

In Masonry Brother Officer was initiated as an Entered Apprentice on Nov. 09, 1992,
Passed as a Fellowcraft on Dec. 14, 1992, and Raised as a Master Mason on Jan. 11, 1993 in
Sparta Lodge # 99. Brother Officer served as Worshipful Master in 1999 and received the honor of Mason of the year in 1998. He continues to serve the lodge as Chaplin and by performing various degree parts and other jobs as needed.

Companion Officer was exalted in Mt. Olivet Chapter # 87 on August 14, 1993 and
served as the Excellent High Priest in 1998. Robert also is a member of Cookeville Chapter # 112.

Companion Officer was greeted in Sparta Council # 128 on August 14, 1993 and served as
Illustrious Master in 1998. Robert is also a member Cookeville Council #112. Companion
Officer serves Sparta Council as its Chaplin. Robert received the Super Excellent Master’s degree in 1995, and received the Giblite Award in 2008. In the Grand Council Companion Officer served as the Grand Marshal in 2001, and continues to serve the Grand Council as the Grand Representative to Eastern Canada. He received the Order of Silver Trowel March 28, 1998, he currently serves Silver Trowel on the degree team and was elected as the Illustrious King in 2014.

Sir Knight Officer holds the Grand Encampment’s membership medal and was awarded the Knight Commander of the Temple in 2012. He received the Knight Crusader of the Cross on April 26, 2003.

Robert is a charter life member in the Blue Lodge, Chapter, Council, and Commandery. He has also assumed various projects over the years such as the Past Grand Head Plaques for the York Rite, the Grand Council Banner, and Gavels for the Grand Chapter and Council.

Brother Officer was created a 32ₒ mason on April 24, 1993 in Chattanooga, Tennessee.
Brother Officer received the Knight Commander Court of Honor on November 15, 1997 and was Coordinated a 33ₒ Inspector General Honorary on December 04, 2005. Illustrious Brother Officer has served the Chattanooga Valley as President of the White County Scottish Rite Club and still serves as Chairman of the Shoe Program. He currently serves on the Advisory Board for the Valley of Chattanooga, and served as Wise Master of the Chapter of Rose Croix from 2009-2013. He is the Chairman on the Electric and Lighting Committee having served on that committee since 1994. Robert works in the 7ₒ as well as the KCCH investiture and Maundy Thursday service. He is a charter life member of
Chattanooga Valley.

Robert was Past Royal Patron of Fidelity Court # 18 Order of the Amaranth in 2001 & 2008 he is currently a member of Peace Court. He is a member of Sparta Chapter # 440 OES, and a member of the Ancient Toeltec Rite in Topeka KS. Robert belongs Alhambara Shrine A.A.O.N.M.S., Al Menah Shrine Hillbilly. Member of Zelmar Grotto # 176. Sword of Bunker Hill, Columbia Mo. and Tennessee Yellow Dog.

He is a charter member Tennessee Synod # 1 Ancient and Heroic Order of the Gordian Knot. Serves as one of the principal officers. He is a charter and life member of Tennessee Forest # 195 Tall Cedars of Lebanon and served as its chartering Scribe, a Trustee and in 2003 he served as Grand Tall Cedar. He is the charter Secretary, Masonic Order of the Four Black Llamas.

Sir Knight and Cousin Officer is a charter and life member of Gaelic Council # 60 Knight Masons and served as Scribe from 1998-2010 and served as Excellent Chief in 2012. He continues to serve as the degree master for Knight of the East.

Robert is a life member of Cherokee York Rite College, serving as Governor in 2003, he
received the honor of the Order of the Purple Cross in 2003. Robert continues to work in the Order Knight of York degree.

Companion Knight Officer is a Past Sovereign of St. Gregory Conclave Red Cross of
Constantine serving in 2006. He is also a Past President of the Red Cross of Constantine Breakfast Association of Tennessee. He continues to serve the Red Cross as a member of the College of Viceroys, and Senate of Sovereign degree teams.

Life Member – Royal Order of Scotland and is the Charter Secretary of Robert the Bruce
Association.

In the Allied Masonic Degrees Robert served as the Charter Sovereign Master of N.E. Oldham Council # 378 and currently serves as secretary/treasurer. He was elected as the Charter President of the AMD Association for Tennessee and served in 2001&2002. He also has serves as the Charter Festival Director for the association since 2006. He holds the honorary title of Knight Commander of the Red Branch of Eri. He belongs to the Order of the Bath, Order of the Cork and Order of St. Patrick.

He is a member of the National Sojourners and belongs to Andrew Jackson Camp # 385 and Chattanooga Camp # 540 where he is a charter member. He is also a member of Hermitage Camp # 385 Heroes of 76.

Robert is a charter member of Solar White Quarry, Monroe, NC. The Worshipful Society of
Free Masons, Rough Masons, Wallers, Slaters, Paviors, Plasters & Bricklayers (THE OPERATIVES) Robert and holds the 5⁰ and is serving in as Junior Warden and confers the 2⁰ of the order. He also serves as the Regional Clerk for the United States of America.

Sir Knight Officer is a charter member of Cornelius Chapel # 104 St. Thomas of ACON and
served as the Worthy Master in 2013.

Robert is a member of Masonic Societas Rosicruciana in Civitatibus Foederatis and holds the eighth grade of the order and serves as the secretary.

He is a member of Mayflower Conclave Knights Preceptors.

Robert is a member of the Knights of Pythias and received the rank of Knight on October 07, 2000. He served as Chancellor Commander of Wildey Lodge # 194 in 2003 and was the Charter Chancellor Commander in 2009 of Blue Grass Lodge # 276 in Sparta Tn. He has received various honors including the Supreme Chancellor’s Certificate of Honor and Pythian of the Year for Blue Grass Lodge and for the State of Tennessee. He is a member of El Teva Temple Dramatic Order Knights of Khorassan, SEPA, and the Past Grand Chancellors Association.

Robert was elected as Grand Outer Guard on June 8, 2008, advancing to the Chair of Grand Chancellor for the State of Tennessee on June 10, 2012.

He is a member of the Lt. William P. Quarles Chapter, Sons of the American Revolution and General George Dibrell Camp # 875 Sons of the Confederacy. He is a Kentucky Colonel and Tennessee Colonel as well as a Tennessee Squire.

Robert was elected as Grand Captain of the Host for the Grand Chapter of RAM in March 2011 advancing each year to the position of Most Excellent Grand High Priest.