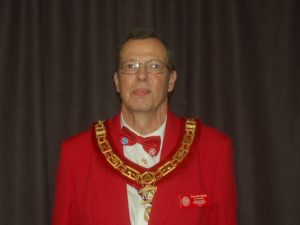 Steven is the proud father of two children, daughter April and son Bradley.

Steven has worked in various manufacturing facilities and is currently a fuel transport driver for Tri Star Transport in Nashville.

Sir Knight Barnett was inducted as a Knight Crusader of the Cross (KCC) in March 2015 and received the Knight York Cross of Honor (KYCH) at Tennessee Priory #15 in March 2017. He is the Grand Chapter Representative to the State of Nebraska.

Brother Barnett became a 32nd degree Scottish Rite Mason at the Memphis Consistory in the Valley of Memphis in November 2018.

Brother Barnett’s other Masonic affiliations include: West Tennessee York Rite Association, West Tennessee Forest #213 of the Tall Cedars of Lebanon, Tralee Council #41 Knight Masons, Masonic Order of the Four Black Llamas, Masonic Order of the Sword of Bunker Hill, and Order of the Eastern Star #261 in Milan where he is currently serving as Worthy Patron. Companion Steven was elected Right Excellent Grand Scribe on March 27, 2017 and progressed each year being elected Most Excellent Grand High Priest, Grand Chapter Royal Arch Masons of Tennessee on March 25, 2019.