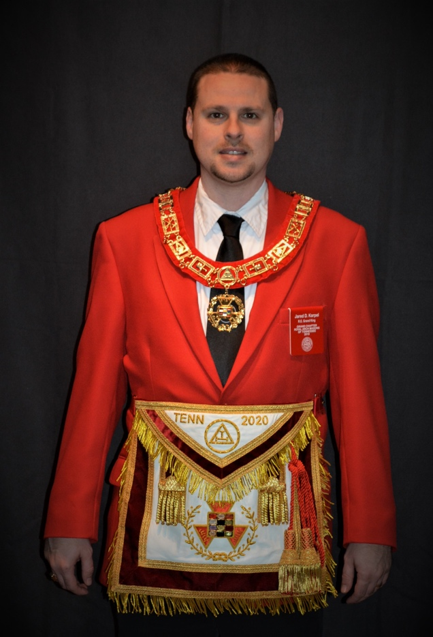 Jared David Karpel was born to Kenneth Max and Connye Renee Karpel on July 22, 1985 in San Diego, CA. He was educated in the public schools of San Diego, CA, and Charleston, SC. He also attended private schools in Charleston, SC and Puerto Rico. He is a graduate of Middle Tennessee State University where he earned both a Bachelor’s and Master’s Degree in Education. He is employed as a teacher in the Maury County School System. He is married to his wife Becky and has 2 daughters, Laya and Shayna.

He was raised to the Sublime Degree of Master Mason on July 18, 2005 in Hohenwald Lodge #607 serving as Worshipful Master in 2010. Brother Karpel received his Pin of Excellence on May 4, 2007. He transferred his membership to Columbia Lodge #31 in 2011 and served as Worshipful Master in 2016. Brother Karpel served as District #6 Chairman from 2008-2010. He was appointed Worshipful Grand Steward for the Grand Lodge F&A.M. of Tennessee in 2014.

Brother Karpel is a recipient of the Demolay Honorary Legion of Honor and the Knights Templar Cross of Honor.

Companion Karpel was elected Grand Captain of the Host on March 20, 2017 and advanced each year and was elected Most Excellent Grand High Priest of the Grand Chapter of Royal Arch Masons of Tennessee on March 23, 2021.