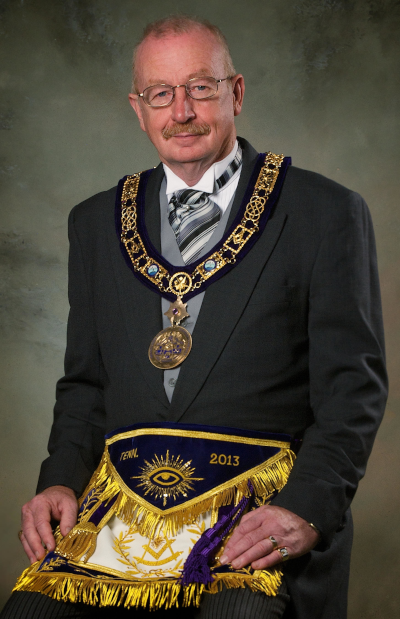 Roy Clinton Etherton was born December 8, 1949, in Pikeville, Tennessee, the son of Wanda Louise and Elbert Clinton Etherton. He was educated in Bledsoe County Schools and the University of Tennessee. He retired from BASF Corporation in February 2012 with over 42 years of service, most recently in quality control.
Bro. Etherton is married to the former Peggy Powers. They have three sons, Clint Etherton, Phillip Etherton and Herb Keylon. They have four grandchildren and one great granddaughter.
An active member of Washington Baptist Church, he has served as Sunday School teacher and as a member of the executive board of the Tennessee Valley Baptist Association. He is presently a member of the finance committee, benevolence committee and trustee.
He was raised in Dayton Lodge #512 on May 19, 1984 and served as Worshipful Master in 1988, and has served as secretary since 1991. He served the Grand Lodge as a member of the Appeals and Grievances Committee from March 1995 to March 2000, the jurisprudence committee, and as Grand Chaplain in 2004.
Exalted in Rhea Springs Chapter #83 on March 15, 1986 he served as High Priest in 1990 and 1992. He received the Order of High Priesthood in 1990.
He was greeted in Drummond Council #86 on July 29, 1986 and served as Illustrious Master in 1993. He received the Order of the Silver Trowel in 1993. He is also a member of Calvary Council #140.
He was knighted in Plateau Commandery #38 on August 9,1986 and served as Commander in 1992, 1997, 1998, 2000, 2001, 2002, and 2003. He is also a member of Cyrene Commandery #42, serving as Commander in 2009. He became a member of the Knight Crusaders of the Cross in 1992. He served the Grand Commandery as Grand Sword Bearer in 1993, as District Instructor for several years and as Right Eminent Grand Commander in 2000 and received the Knight Commander of the Temple in 2001.
He is a member of Tennessee Priory #15 Knights of the York Grand Cross of Honor, the Knoxville Scottish Rite Bodies holding the rank of 33rd degree, Alhambra Temple of A.A.O.N.M.S., Cherokee York Rite College receiving the Order of the Purple Cross, St. Mathias Conclave Red Cross of Constantine, Royal Order of Scotland, Allied Masonic Degrees, Knight Masons, Knight Commanders, Tennessee Lodge of Research, East Tennessee Past Masters Association, the Chattanooga Area York Rite Association, the Knoxville York Rite Association, Dayton Chapter #360 OES, Tall Cedars of Lebanon and the National Sojourners. He is an Honorary Kentucky Colonel. He is a member of the Holy Royal Arch Knights Templar Priest and the Masonic Societas Rosicruciana In Civitatibus Foederatis. He was installed as Grand Governor of the York Rite College of Tennessee in Reston, Virginia on August 2, 2008.
In the Royal Arch Chapter, he is Grand Representative to South Carolina, in Council, Grand Representative to Washington, in Commandery ,Grand Representative to South Dakota and in Grand Lodge, Grand Representative to Missouri. He is a member of National Sojourners. He has served as aide-de-camp to Grand Generalissimo of the Grand Encampment and is a member of the ritual committee of Grand Encampment of the United States of America.
Roy was elected Junior Grand Warden March 25, 2010 and advanced each year being elected Most Worshipful Grand Master on March 28, 2013.