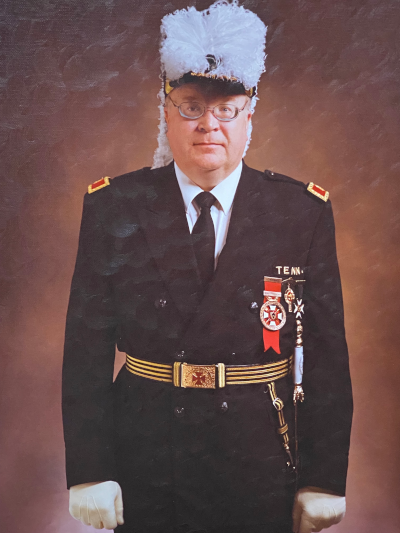 Donald Gene Clayman was born July24, 1949, in Kingsport, Tennessee, the son of Lloyd and Carolyn Wise Clayman and was educated in the public schools of Sullivan County. He is employed at Eastman Chemical Co. and is responsible for Quality Assurance Group of the Contract Services Department.
Bro. Clayman is a Past Master of Kingsport Lodge No. 688 served as Master in 1992 and is presently serving as Secretary. Companion Clayman was exalted in Lynn Bachman Chapter No. 195 and served as High Priest in 1984. He received the Order of High Priesthood in 1985.

He was greeted in Kingsport Council No. 117 and served as Illustrious Master in 1985. He received the Order of the Silver Trowel in 1986.

Sir Knight Clayman was Knighted in Kingsport Commandery No. 33 and served as Commander in 1987. He served the Grand Commandery as Grand Warder in 1995. He was elected Grand
Captain General in 1998 and has advanced each year, being elected Right Eminent Grand Commander on April 28, 2001.