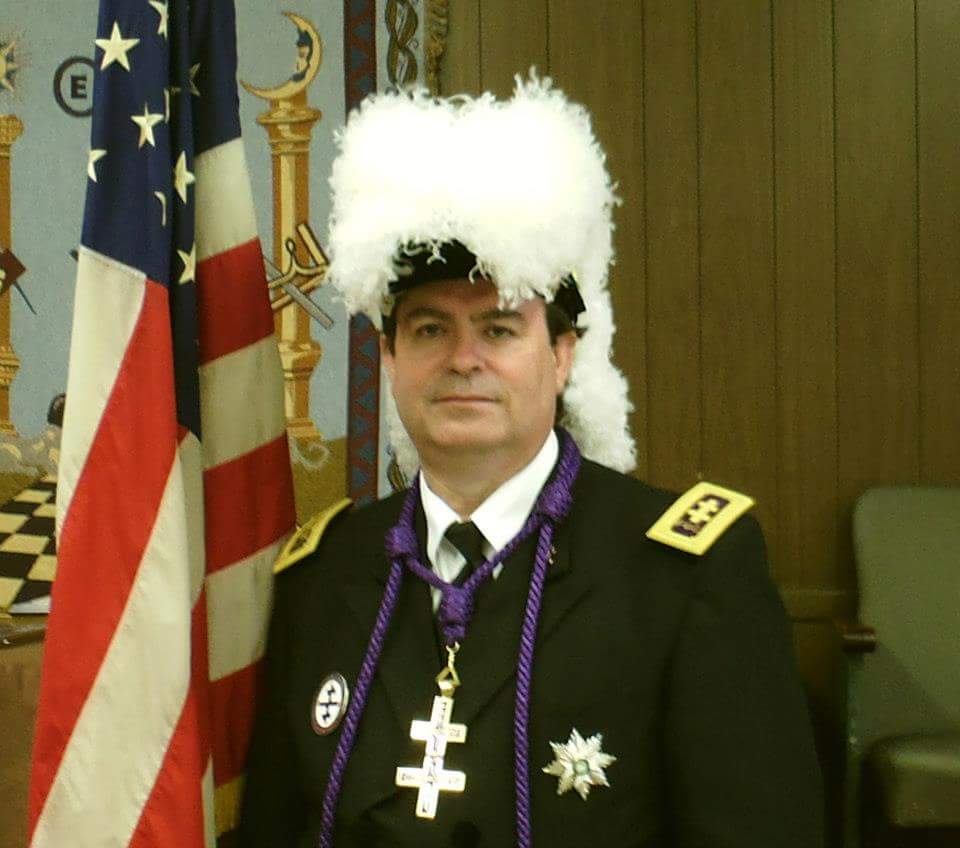 Born on December 13, 1963 in Rome Georgia, the son of Lewis and Glenda (Tierce) Plemons and was educated in the Public Schools of Floyd County Ga. He has been employed
by McKee Foods Corporation (Little Debbie Snack Cakes) for over 34 years and works in the Marketing and Sales Department.

Sir Knight Plemons was married to the former Karen Lynn Wade on April 4, 1987 and they have been blessed with two wonderful children: Mary Elizabeth and Samuel Lewis.
Sir Knight Plemons is of the Baptist faith, he is an Ordained Minister, Deacon, Sunday School Teacher and serves on various Committees.

Brother Plemons was raised in Harrison Lodge No. 114 F & AM on June 1, 1993. In 1996 Brother Plemons affiliated with Chattanooga Lodge No. 199 F & AM where he served
as Worshipful Master and was elected Secretary for 22 years.

Companion Plemons was exalted in John Bailey Nicklin Chapter No. 49 R.A.M. on November 5, 1994. He served as High Priest in 1998 and was elected as Secretary from
1999 to 2012. He received the Order of High Priesthood on March 23, 1998 and presided as President of the Tennessee Council of Anointed High Priest in 2006. In the
Grand Chapter Companion Plemons served as Grand Chaplain during 1997 and 2014, and is a holder of the General Grand Chapter Distinguished Service Medal.

He was awarded the Knight Commander of the Temple in 2003 Served as Aide de Campe to R.E. Sid Dorris the Grand Captain General and Grand Generalissimo of the Grand
Encampment Knights Templar U.S.A. Sir Knight Plemons also served as the Chairman of the Public Relations Committee of Grand Encampment. He served the Grand Encampment
as Right Eminent Department Commander for the Southeastern Department during the 45th Triennial, and as Grand Sword Bearer during the Grand Session of the 45th Triennial
. In 2012 he was awarded the Knight Grand Cross by the Grand Encampment Knights Templar. He was elected a Trustee of the Knights Templar Eye Foundation during the 45th
Triennial. He served as the Campaign Chairman for the 45th, 46th and 47th Voluntary Campaigns of the Eye Foundation.

Brother Plemons is a member of the Valley of Chattanooga Scottish Rite Bodies, is a PastCommander of Kadosh. He is the Assistant Personal Representative of the SGIG in
for the Valley of Chattanooga, and serves on the Executive Committee. He was invested with the Rank of KCCH in 1997, and was coroneted a 33° Sovereign Grand Inspector
General Honorary in 2003. And is very active in Valley Ritual work.

He is a member of Tennessee College Societas Rosicruciana in Civitatibus Foederatis served as Chief Adept of the College from 2005 to 2016, and currently is serving as
Secretary. He serves the High Council SRICF as Preceptor. He is a Past Preceptor of Holy Manger Tabernacle Holy Royal Arch Knights Templar Priest. He serves the Grand
College HRAKTP as Deputy Grand Preceptor. He is a member of Cherokee York Rite College No. 152 where he served as Governor in 2000, received the Purple Cross in 2002
and the York Rite Sovereign College Distinguished Service Award in 1999, and has served as Secretary since 2001. He is a member of Tennessee Priory No. 15 KYCH where
he is a Past Prior, Gaelic Council No. 60 Knights Mason where he served as Excellent Chief in 2000 and currently as Scribe. He is a holder of the Knight Companion of
Zerubbabel from the Grand Council Knight Masons, and served as Super-Intendant for East Tennessee. In the AMD he is Past Sovereign of Tennessee Council No. 341 and a
Charter Member/Secretary of George Cooper Connor Council No. 432. He is a Past Sovereign of Saint Gregory’s Conclave Red Cross of Constantine. He is a Charter member
of Cornelius Chapel Saint Thomas of Acon, and Past Worthy Master. He is a Charter member of Tennessee Court No. 122, Masonic Order of Athelstan, where he is a Past
Master and currently serves as Secretary. He is a Charter Member of Alfred the Great, Order of Pilgrim Preceptors in Tennessee. He is also a member of Hixson O.E.S,
the Alhambra Shrine where is a member of the Highlander Pipes and Drums, and Order of Knight Preceptors.