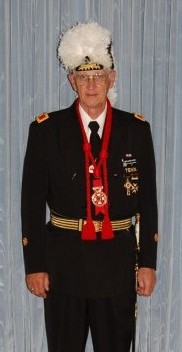 Born in Charlotte, Tennessee on November 15, 1936, the son of John and Virginia Hafner. He was educated in the public schools of Dickson County, Tennessee. He is a veteran of the United States Army, having served as a Morse Intercept Operator with the Army Security Agency in Okinawa and Taiwan. He retired from Aladdin Industries in Nashville, Tennessee, on April 1, 1999 after 33 years service, where he held several management positions.

Brother Hafner was raised a Master Mason on May 27, 1967 in McWhirtersville Lodge No. 375. He served as Worshipful Master in 1974 and has served for over 20 years as Trustee. He served as Grand Steward of the Grand Lodge in 1979.

Companion Hafner was greeted in Nashville Council No. 1 on August 26, 1967, served as Illustrious Master in 1982, and received the Order of the Silver Trowel in March 1982. He is presently serving as Treasurer of Nashville Council. He served as Grand Instructor for District
No. 2 in 2002 and 2003. He is presently serving as an officer for The Tennessee Council of Anointed Kings.