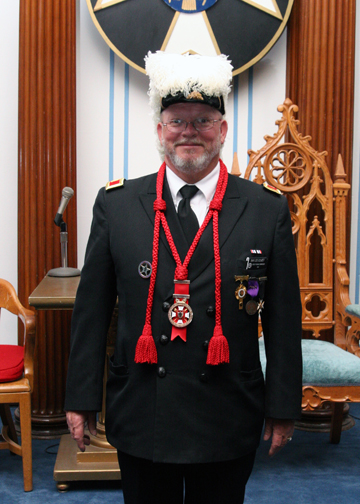 Born 30 September 1948 in Garden City, Michigan, the son of James R. and Violet M. (Grady) Covey. He was educated in Obion County, Tennessee and graduated high school in Plymouth,
Michigan. He is retired from Goodyear Tire and Rubber Company with 30 years. He was  nducted into the United States Army, January 1969, serving in Vietnam January 1970 to December 1970. Entering Tennessee Army National Guard in November 1985 and retiring August 2006 with the rank of SFC.

He married Paula Wilson on 5 August 1967 and they have two sons, James Ray Covey and Matthew Lee Covey, both residing in Union City, Tennessee. They have four grandchildren – Gage, Sulley, Cameron, and Carly.

He was greeted in Union City Council No. 122 in July 1982, serving as Illustrious Master in 1995
and several other times. He has served Grand Council as Grand Marshal. He is the holder of the Grand Council Leadership Medal and received the Order of the Silver Trowel in 1996.

He was inducted into Tennessee Priory No. 15, Knights of the York Cross of Honour in March 1999,  serving as Eminent Prior in 2007. He is a member of West Tennessee York Rite College, West Tennessee York Rite Association in Jackson serving as President in 2000. Also, he is a member of St. Stephens Conclave, Red Cross of Constantine, Tall Cedars of Lebanon, Knight Masons, Allied Masonic Degrees, the Royal Order of Scotland, Zaman Grotto No. 173, the National Sojourners, Memphis Scottish Rite Bodies, Al Chymia Shrine, and Order of the Easter Star.

In the Grand Commandery, Sir Knight Covey was elected Grand Captain General in 2005 and has advanced each year culminating in his election as Right Eminent Grand Commander at the Annual Conclave on May 3, 2008.