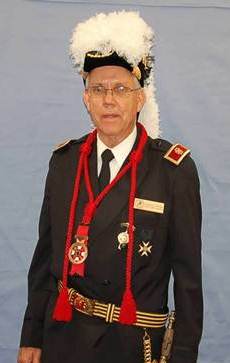 He was educated in Tennessee Public Schools and graduated from Forest Hill High School.

He owned and operated a grocery store for 50 years in the Lewisburg, Tennessee area.

He served 13 years in the Tennessee National Guard.

He has been an active member of the Belfast Lions Club for 50 years.

He served as Grand Pursuivant in 1996.

Companion Harber was exaulted into the Royal Arch Degree in Franklin Chapter No. 2, in 1993, and subsequently served as High Priest in 1996.

He is a holder of the Grand Chapter Distinguished Service Medal.

He was greeted as a Select Master in Franklin Council No. 134, and served as Illustrious Master
in 1997.

He received the Knights Crusader of the Cross in 2000, and is a life member.

He served as Grand Sword Bearer of the Grand Commandery of Tennessee in 2001, Grand Warder in 2005, and Grand Junior Warden in 2008.

He was elected as Grand Captain General in 2009 and advanced each year until being elected as Right Eminent Grand Commander on May 5, 2012. He holds the Knight Templar Cross of Honor.

He is a member of the Middle Tennessee York Rite Association and served as President in 2007.

He is a member of Middle Tennessee York Rite College No. 143, where he received the Order of the Purple Cross in 2007.

He is also an active member of Lewisburg Chapter No. 318, Order of the Eastern Star, and served as Worthy Patron in 1993.

Jim continues to serve in many other Masonic organizations and committees.